Welcome to Day 5 of racing!

You have to take your hat off to these riders.  Although day 5 is when the reality of the distance starts to bite, it has taken this long for one of the front runners to succumb.

Sally Conway started the day at the front of the race, but she finished it in the blood wagon.  What on earth happened?  Radio silence from the organisers.  She's in UB presumably being checked out by doctors, so possibly an involuntary dismount - rotten, rotten luck and wishing her the speediest possibly recovery.  The race won't be the same without this gritty cowgirl from Taroom, Queensland (Australia) raising money for mental health awareness and support in rural communities.  A fantastic cause as this is a serious issue for country people living in isolation - you can donate online here. 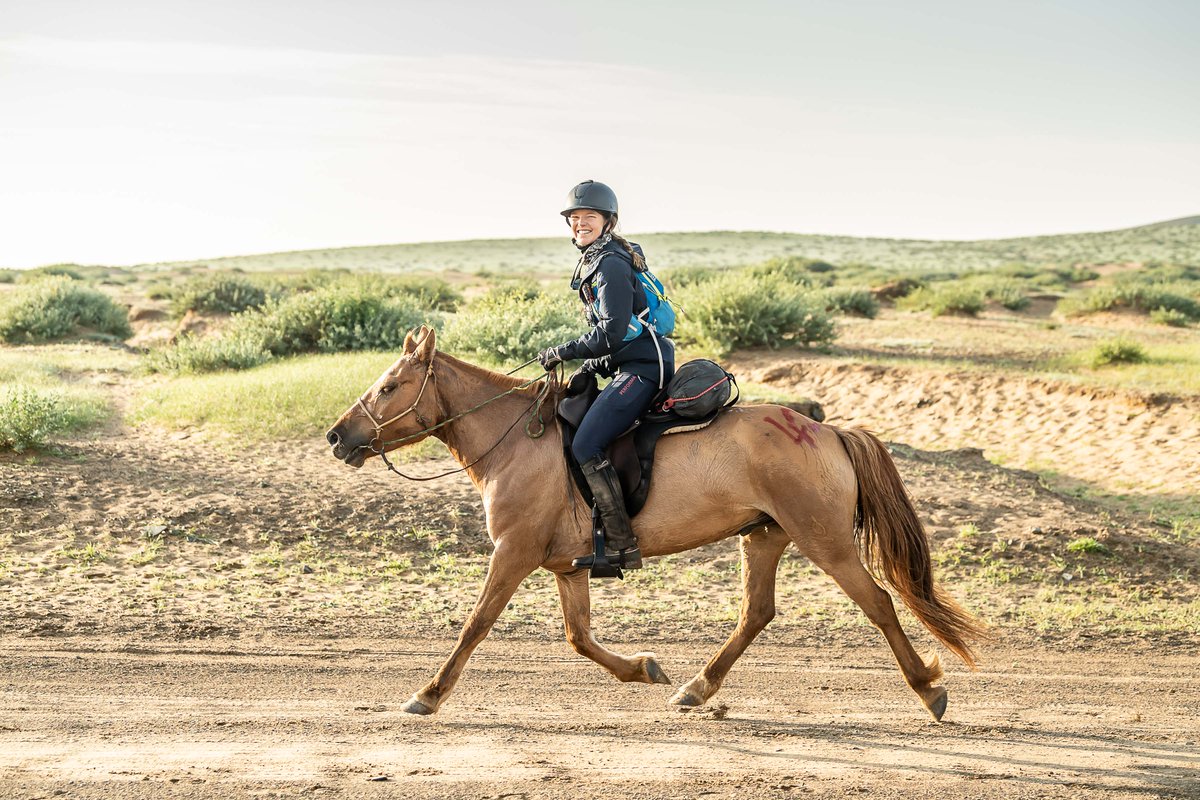 Sally Conway earlier in the race. Thanks to Sarah Farnsworth & the Adventurists for the photo

Naomi Crombeem joined her; less of a surprise only because Rachel Roman had been forced to leave her behind at HS12 earlier in the day.  She's sick.  No further details here, either, but every year as exhaustion kicks in riders' bodies start to fail in a variety of weird and wonderful ways.  This can be chafing, injuries, heatstroke, hypothermia or just a plain old spot of puking and … I won't go into details.  Alanna Watt's mum reads this with her cup of tea in the morning.

What riders who are not experienced in ultra-endurance events (that's everyone other than Sampie as far as I'm away) may not realise is that you don't always get fair warning.  Everything is manageable until it suddenly isn't and tired riders do not have razor sharp reflexes.  Do not underestimate the importance of strength and fitness in this race. 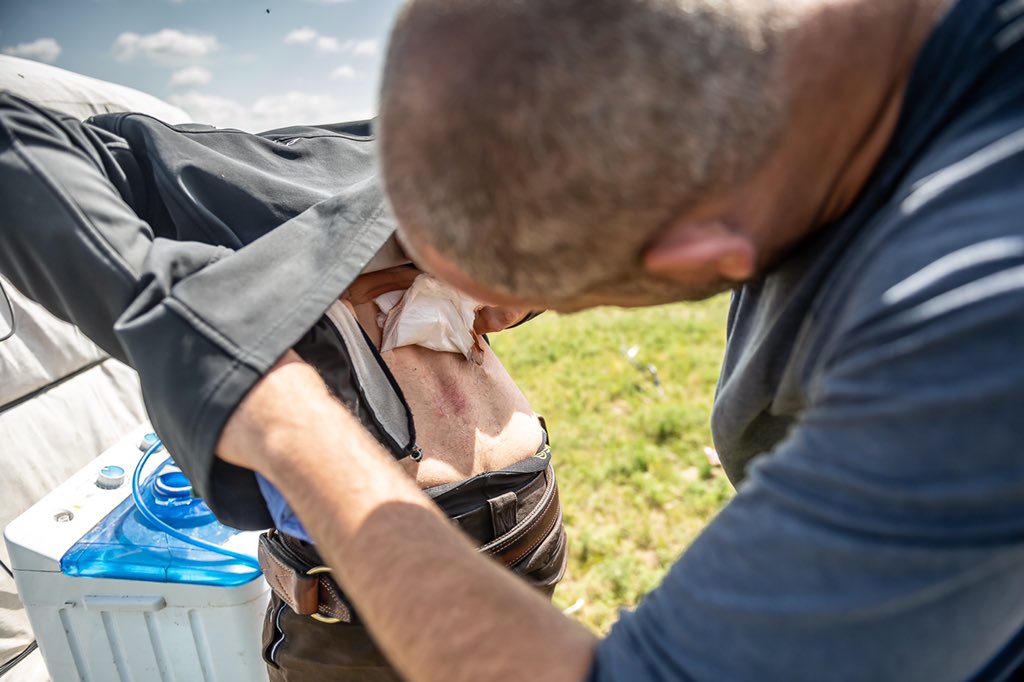 Medic Andy treats some chafing. Thanks to Sarah Farnsworth & the Adventurists for the photo.

It isn't just the riders that will be feeling the heat, either - the crew are now covering SEVEN horse stations and their working hours are not limited to daylight.  Part of the reason the time penalties for riding later than allowed are so strict (8 to 8.30 2 minutes penalty for every minute late, 8.30 to 9.30 3 hour penalty and after 9.30 -disqualification) is to protect the crews; after a long hard day working on the steppe no-one wants to go trawling around for a lost rider in the middle of nowhere.  It's a brilliant job, but it's a hard job and they deserve a lot of respect.  Special mention goes to the Mongolian families who spend weeks preparing their horses and their homes for the Derby onslaught, some year after year.  Nothing is easy on the steppe and this race couldn't happen without them.  Especially the important bit where visiting riders with an over-inflated ego are made to feel Quite Small. 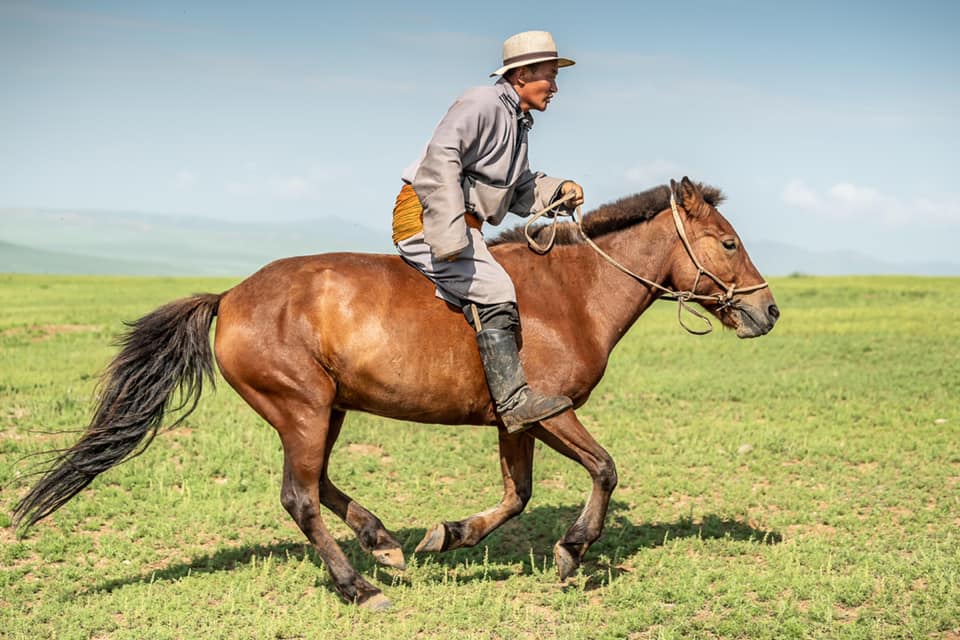 While the people in the race, around the race and supporting the race are starting to feel a bit... over it all, the horses continue to do what horses do. 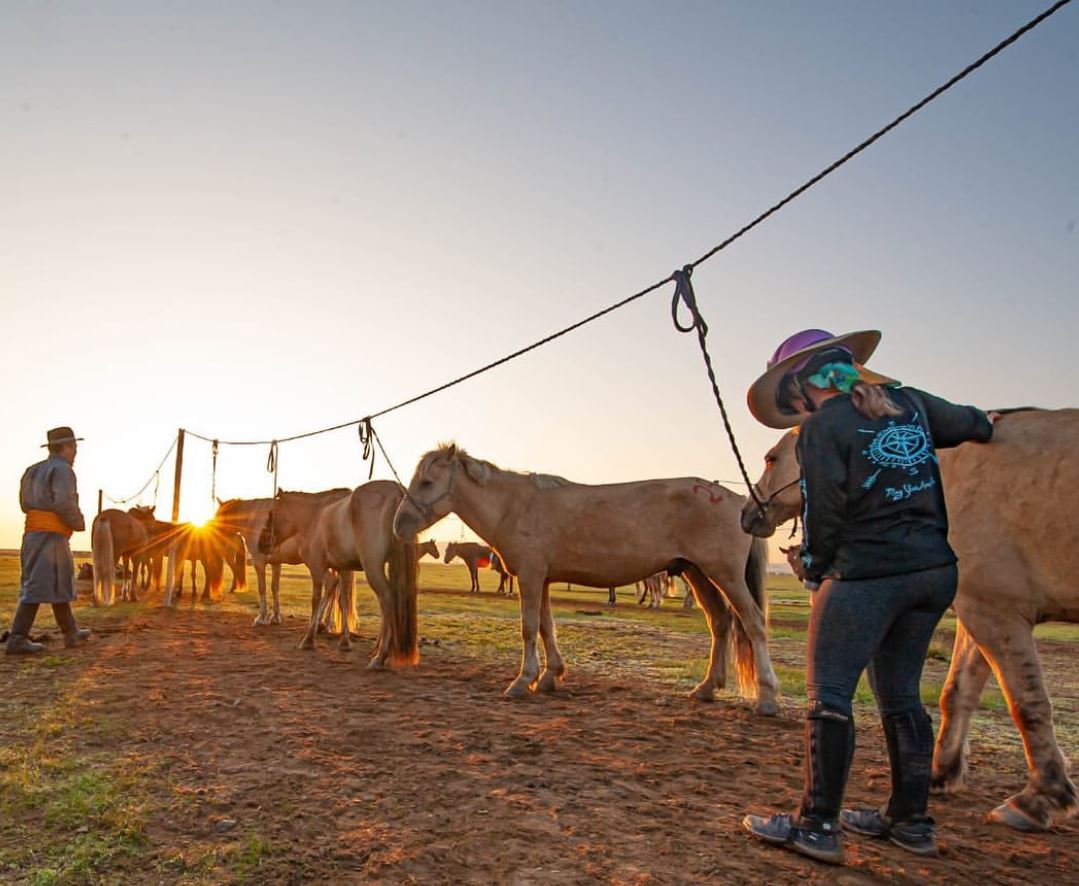 Patti Long choosing a horse. Thanks to Sarah Farnsworth & the Adventurists for the photo. 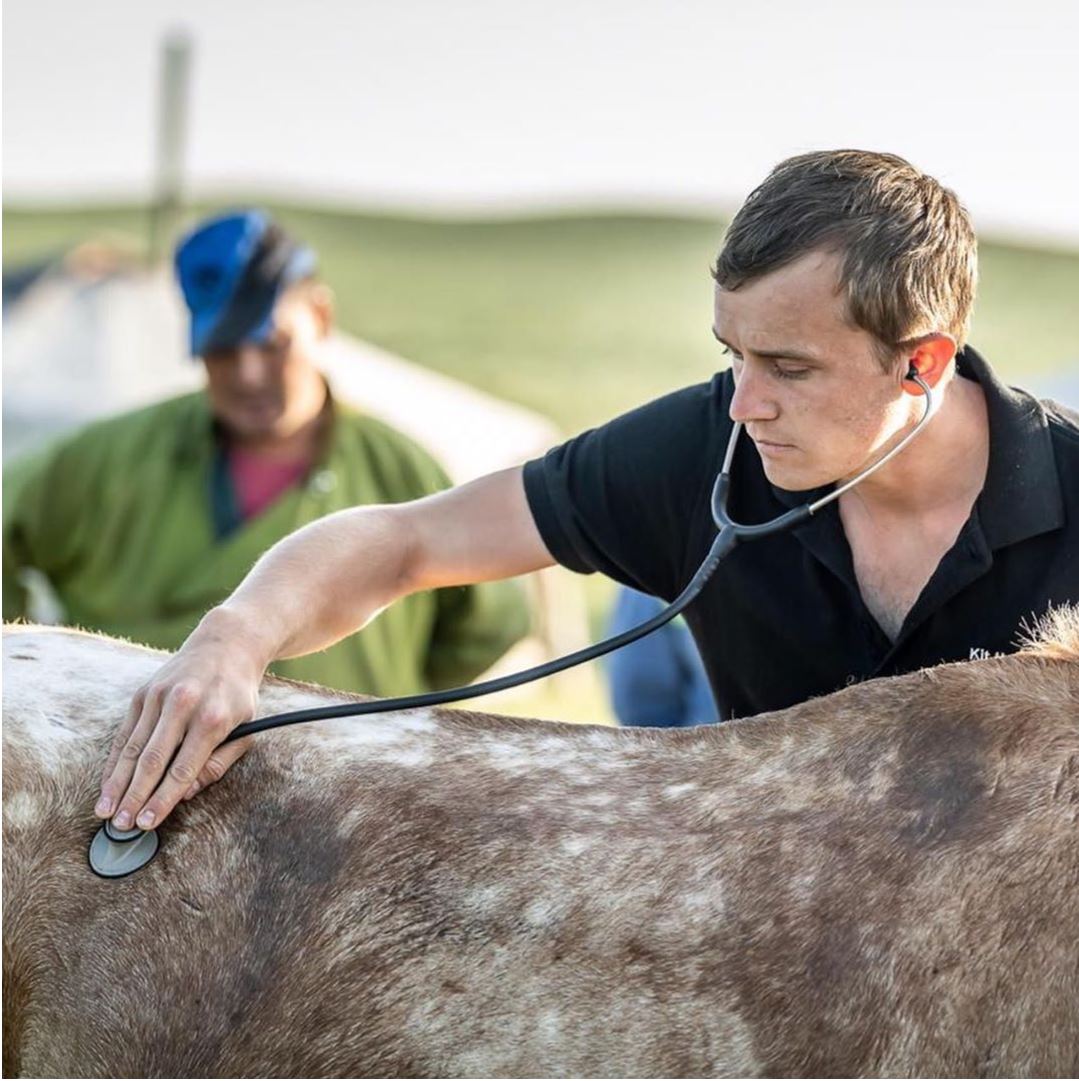 Vet Kit checking heart rate. Thanks to Sarah Farnsworth & the Adventurists for the photo 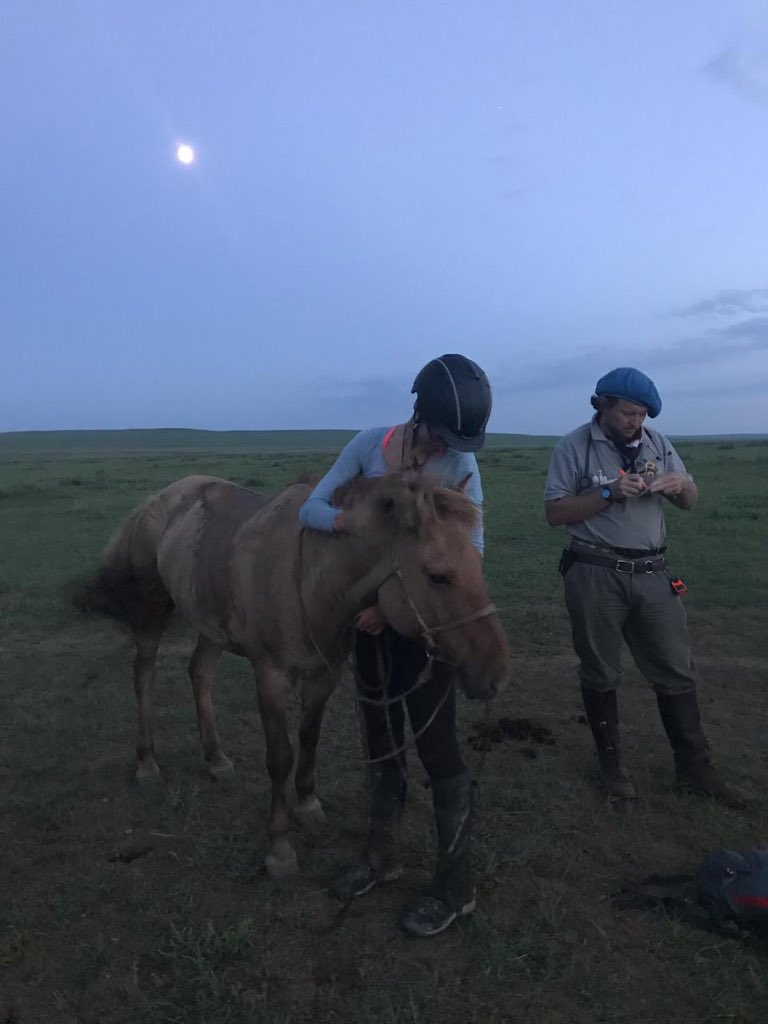 ZH giving her horse a cuddle. Cozy not too worried. Thanks to Sarah Farnsworth & the Adventurists for the photo

And exercise their right to deliver a good ole' HELL NO if they are NOT IN THE MOOD. 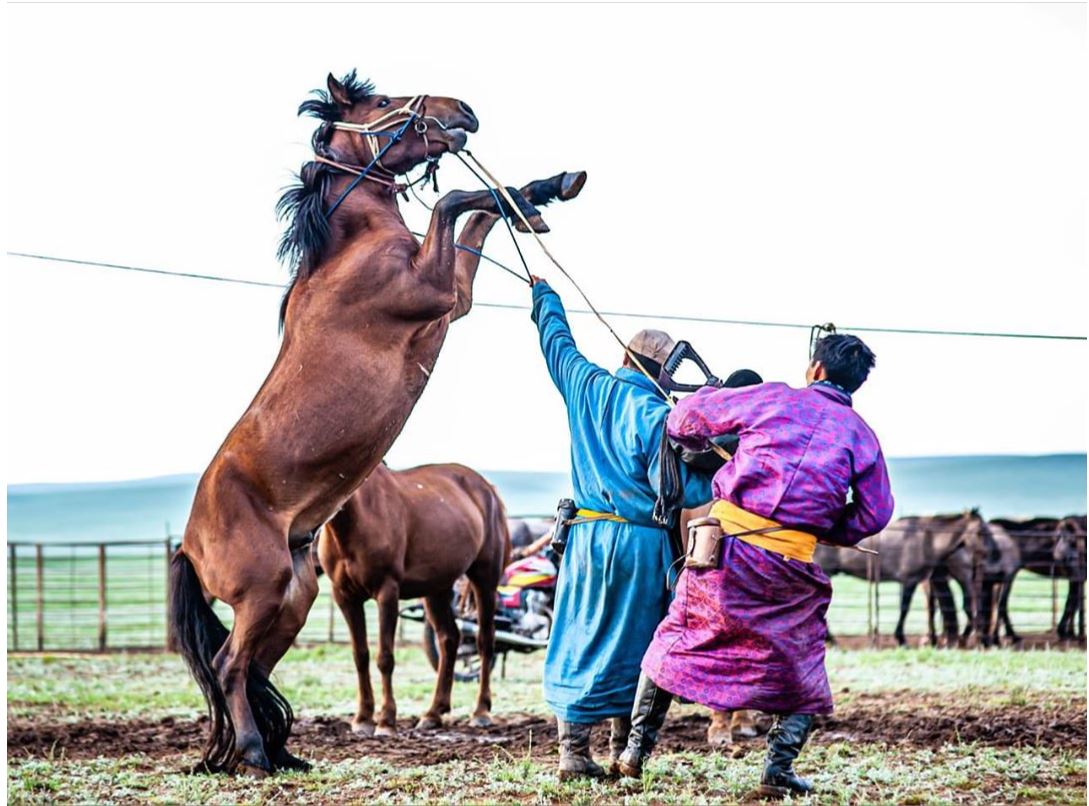 You WHAAAAAAAAT?!!! Thanks to Ian Haggerty photography & the Adventurists for the photo.

Anyhoo… how are the featured riders doing?

Justine surrendered her lead when her horse felt a bit foot sore.  This is the sort of noble self-sacrifice that might cost her the race, but I can guarantee will earn her the respect of her fellow riders and crew for years to come and one of the reasons why ex-Derbyists are never overly worried about who actually wins.  This is how you win the race for everyone who knows and loves it.  Great stuff.

She also gets top points for her ability to fashion whatever she needs from whatever she's got - I've always maintained that Kiwis and Mongolians are similar in many ways and this is the perfect demonstration of that spiritual connection. 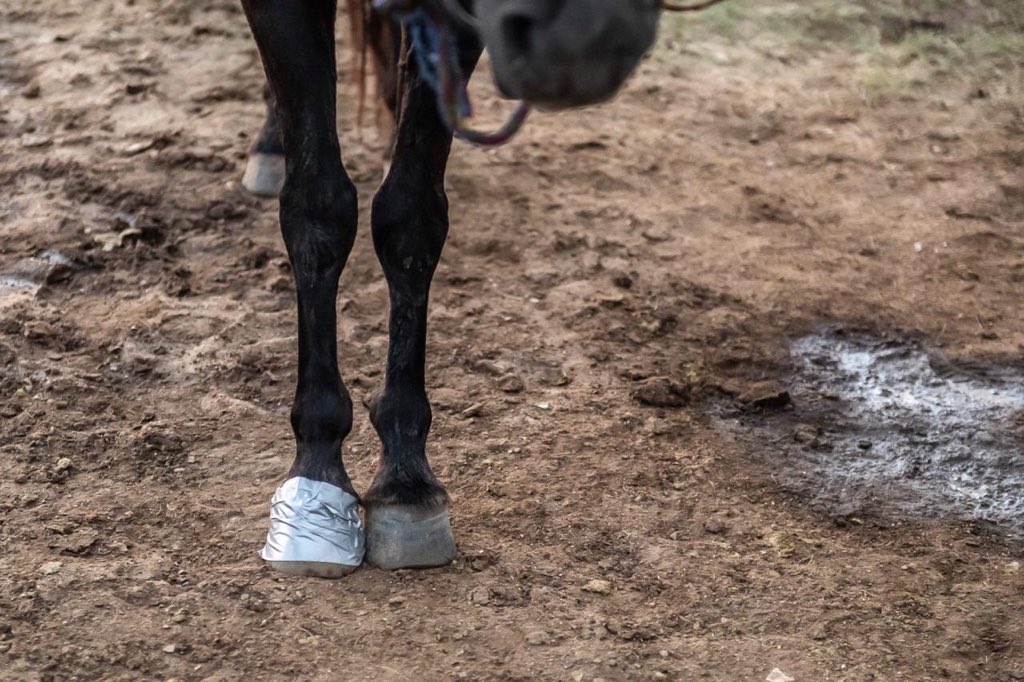 A Very Handy Kiwi. Thanks to Sarah Farnsworth & the Adventurists for the photo.

Elise hasn't quite ridden back from the vet penalty she served late yesterday, but she is still up at the front.  Both ladies overnighted at HS19 in 9th place.

Another hard day for Wiesman, who I suspect was hit with his second vet penalty at HS18 last night.  The official standings have him waaaay back in the order with Linda van Gorkum who is at HS16 so that can't be right.  Can it?!  I have him at HS18... 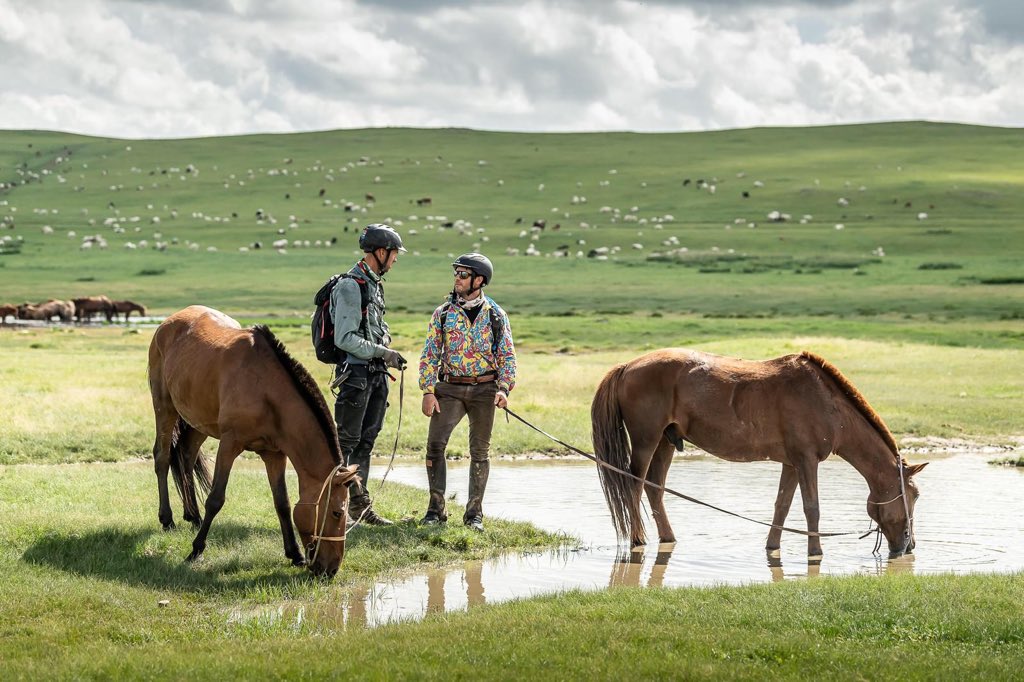 Wiesman talking to fellow featured rider Sam Chisholm. Thanks to Sarah Farnsworth & the Adventurists for the photo.

Sampie is doing everything he can to save his horses and avoid the same fate.  He had a better day, finishing in joint 5th place at HS19.  I am still rooting for these guys - NGIKUFISELA IWELA, chaps! 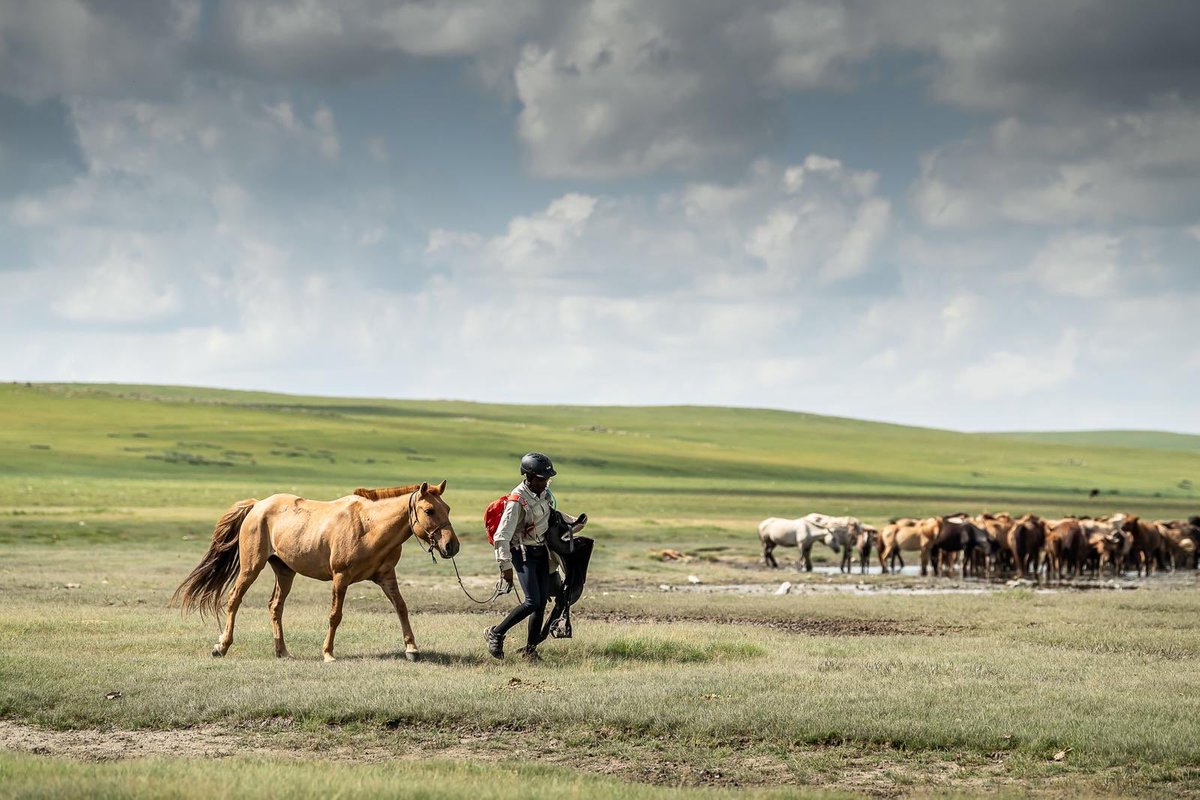 Sampie carrying his gear & leading his horse. Thanks to Sarah Farnsworth & the Adventurists for the photo.

The indomitable #bantertwins finished day 5 in between HS15 & HS16, well clear of the back of the field and even the pack overnighting between HS14 & HS15.  Nothing will stop these guys - there weren't many updates but they're trucking on and the impromptu team formed early in the race has become a real partnership.  Keep it up! 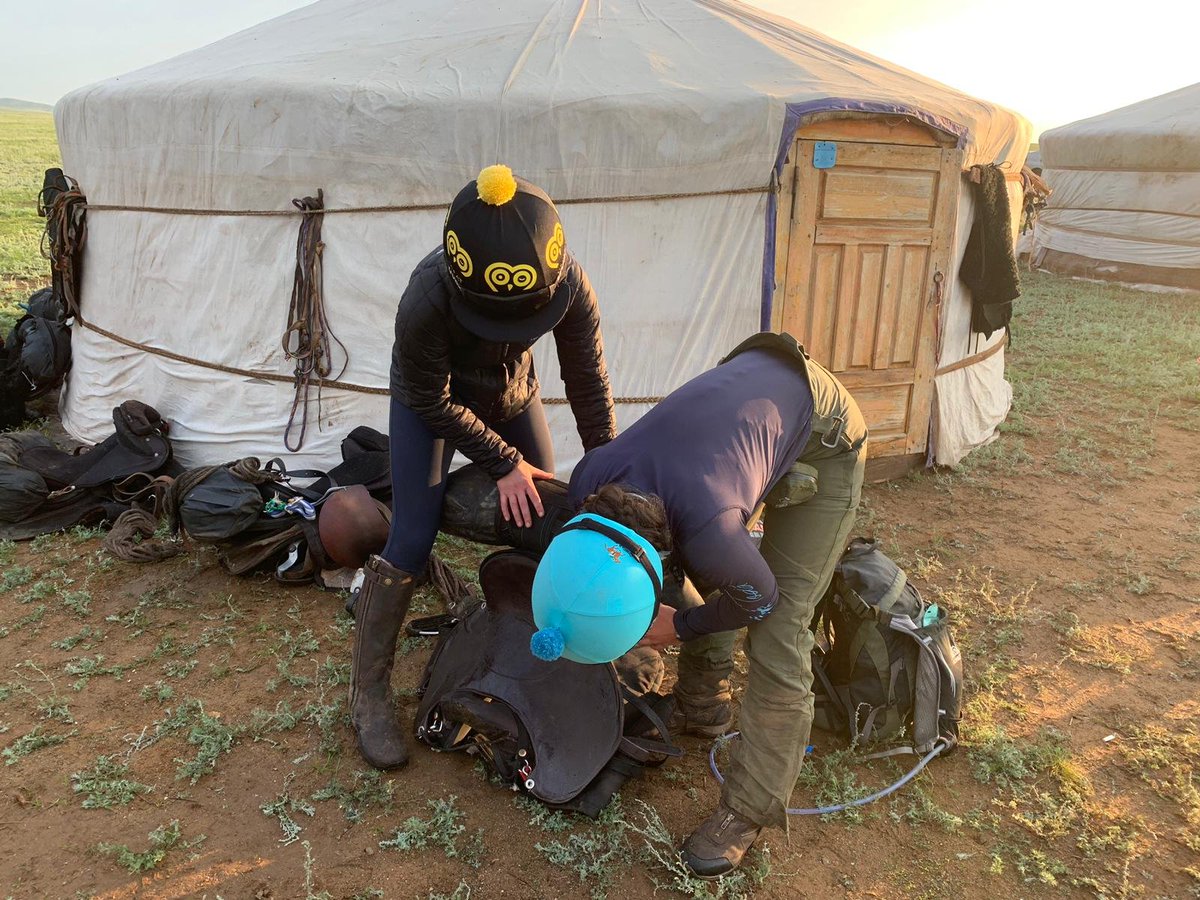 Alanna & Holly working together to sort their gear out yesterday. Thanks to Sarah Farnsworth & the Adventurists for the photo.

Another fierce day of riding for the man in the 80s jacket.  He finished the race at HS19 within sight of the lead (well, almost) and in joint 5th place.  May the bright colours of the crazy pattern fill your heart with joy and your horses heart with strength, brave helicopter driver.

No news of Michael today, but he has finished the day's racing still in the race and hanging on as the very last rider.  He is camped out between HS13 and HS14.  Surely he will need to be moved forwards?  Will the race organisers allow him to remain in the race?  Fair to say that he is struggling to keep in touch... but he's doing it.  I'll keep my fingers crossed for his lucky charms to continue.

The guys have the most incredible support team back in Western Australia - they are running their own updates on Facebook, which I'm enjoying following and Jesse's wife Louise Byrne's posts are often really touching.  Don't get me started on Jesse's children.  I'm soft and only one coffee in today.

As for their performance in the race, you can't fault it.  They are STILL right up there, sitting in joint second place with Margreet Voermans roughly half way to HS20.  They are maybe a third of the leg back from the leader Robert Long (I know, I can't believe it either), but he has a time penalty of 25 minutes yet to serve from failure to check it at a mandatory waypoint earlier in the race so by my reckoning they are... god knows.  Close enough that no-one will be surprised if they cross the line first, anyway.

One note: I hope they're not waiting for Robert to feel his age.  He has ridden his way to the front on the day that most riders start to flag - forget about it.  If they want to win this race, they will have to pull everything out of the bag.  And possibly throw it at Robert.  Having ridden close enough to hit him, hard. 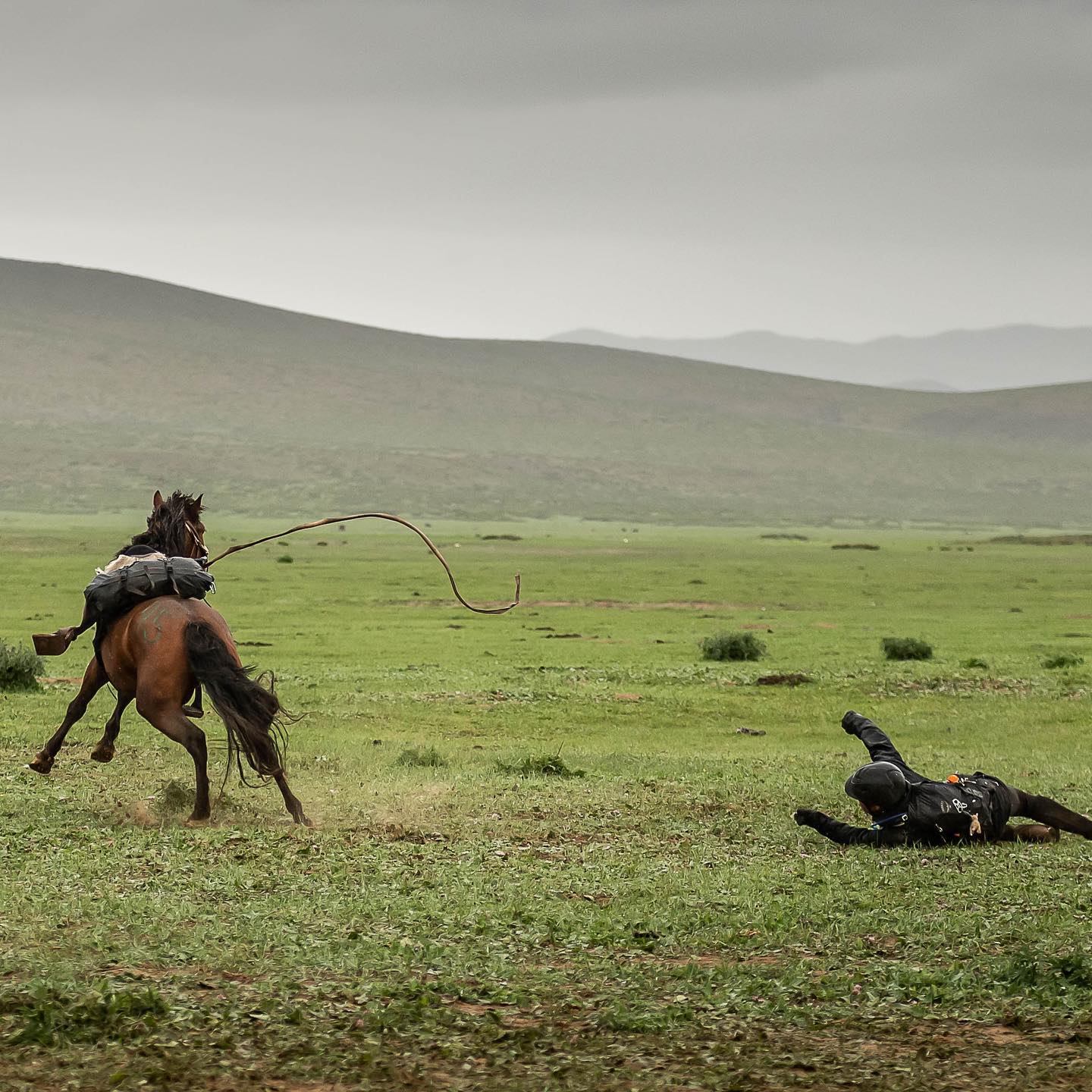 Jesse, about to bounce like his spirit animal/ lucky kangaroo. Thanks to Sarah Farnsworth & the Adventurists for the photoFrank Winters
Frank is one great horse away from taking the lead of this race.  He continues to ride at the front but is either biding his time, riding cautiously, or waiting for opportunity to strike... very sensible if so.  This is the part of the race for riding within your limits while keeping within sniffing distance of the leaders.  Having said that, the front is so unbelievably competitive this year.  No-one would be shocked if ANY ONE of the thirteen riders up front won and Ben Materna & Linda Vegher are refusing to give up just over a station back from the main bunch at the front...

Frank looks as cool, calm and collected as ever.  Definitely not a wildcard any more - #rodeoforever 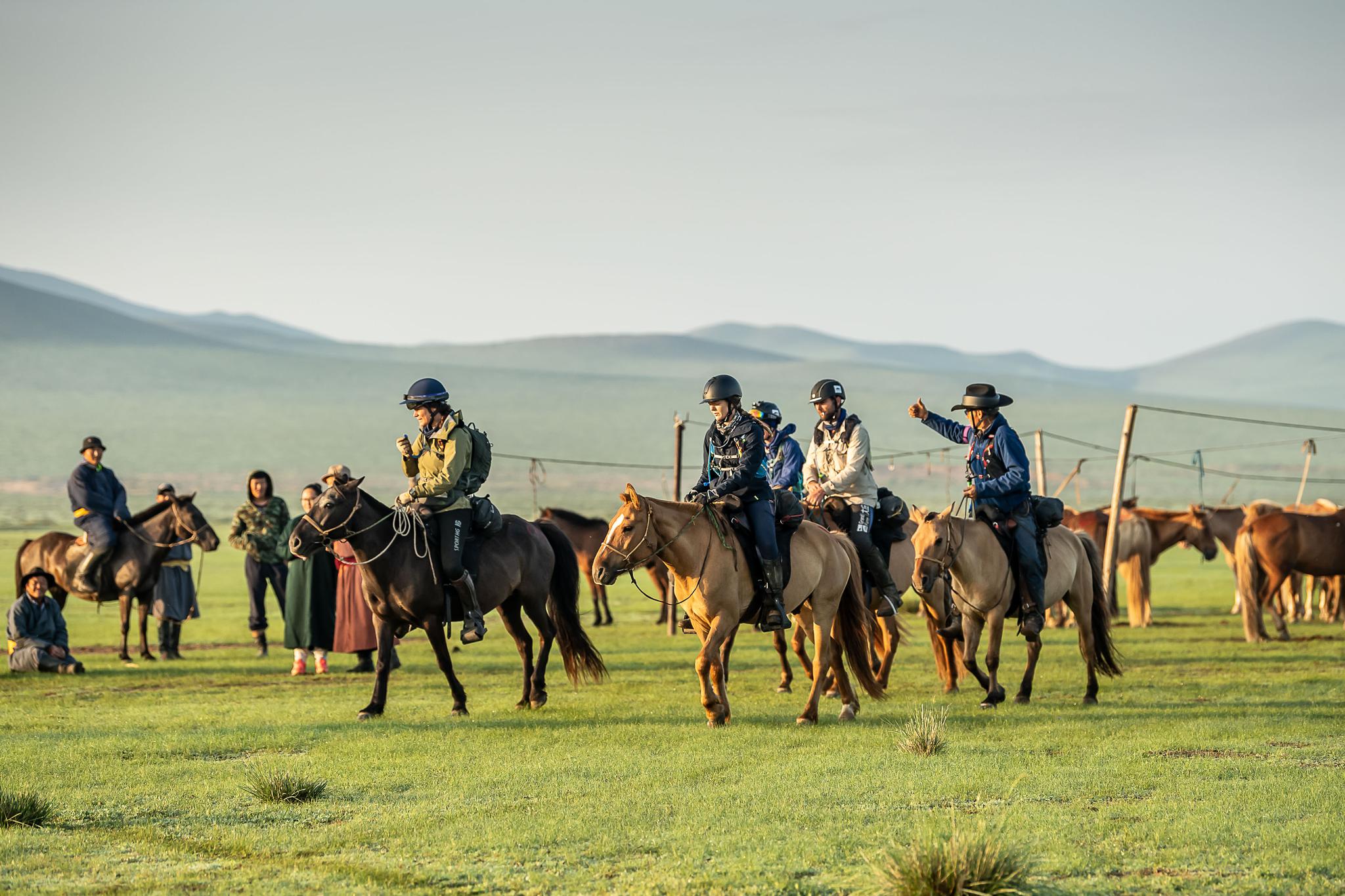 Margreet, Sally, Sarah, Jesse & Frank. Thanks to Sarah Farnsworth & the Adventurists for the photo

I really appreciate your blog on the derby.

I have one question about the RL 15 minute penalty, didn't SB, JB and MV get the same penalty for taking the same shortcut?

I know Ahmed did, who was riding with Robert at the time, but I'm not sure about the others.

It's really hard keeping track of penalties, even when you're in HQ..! Here in NZ I actually thought Robert had already served this one, but an update from last night makes it look like he hasn't...